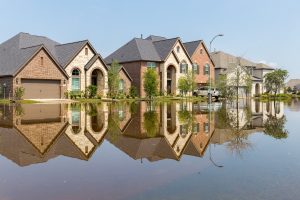 Did you know that well over half of all declared natural disasters involve floods, and that more than 20% of all flood claims occur in areas not identified as high-risk flood zones? Let’s debunk some flood myths that many clients may believe.

Myth #1: My insurance policy covers flood damage.
This is a common misconception. In fact, most property policies only cover damage caused by overflow or accidental discharge of water from within a structure.

Myth #2: I’m not in a flood zone so I don’t need flood insurance.
Designated flood zones may be the only areas where lenders require flood insurance. However, they aren’t the only areas susceptible to flooding. In fact, a flood can occur anywhere. As just one example, about half of the flooding from Hurricane Harvey’s rains occurred outside of flood zones and most homeowners didn’t carry flood insurance on their property. According to a 2018 Insurance Information Institute survey, only about 15% of American homeowners have flood insurance despite the fact that the National Flood Insurance Program reports that 90 percent of all natural disasters in the U.S. involve flooding.

Myth #3: I’m not near a body of water so I’m not at risk.
Even if you’re not located near a lake, river or other body of water, you still face flood risks from other, not-so-obvious causes. For example, flooding can occur from damaged water mains, failed levees and dams, ruptured tanks and towers or a variety of other causes. The dam that failed in central Michigan on May 19 is being referred to as a “500-year-flood,” which means there’s a 0.002 percent chance — 1 in 500 — of it occurring in a given year. It displaced more than 10,000 homeowners.

Myth #5: I can wait until there’s a flood threat.
In many cases, there’s a waiting period before flood insurance goes into effect so it’s better to get it in place when conditions are dry. That way it will be there if, or when, you need it.

MacNeill’s flood team is here to help. If you need assistance with flood coverage, email flood@macneillgroup.com.

Back to Newsletter     < Previous Article     Next Article >